As a mountain dweller, I find the coastal areas enchanting.  The complete change of scenery always elevates my spirit,  and a day on the beach, even more so.  I often find myself looking  out into the Atlantic and wondering were I would end up if I could walk straight across the ocean.   I think the answer is,  somewhere on the African coast.

Fifth graders in Virginia get to learn about the features of the ocean floor and Google Earth supports this unit in a number really interesting ways.  As I was playing with some features of the globe, I found  a setting which lets you determine the ocean depth by “pinning”  a placemarker to the ground.  Typically, the placemarker will show you the elevation at such a point.  If the placemarker happens to be pinned underwater, it will display the depth at which it is pinned.   So one can essentially find the depth of the ocean anywhere one can place a pin.

I thought about my habit of looking across the ocean and thought it might me interesting to entertain a walk across the ocean floor.  It also occurred to me that if the depths were accurate,  then placemarkers could be arranged is such a way that they represented some of the features students  are tasked with knowing about:

So I placed markers at regular intervals and used Google Earth’s measuring tool determine the distance from Virginia Beach to the placemarker.  I figured if I had the distance from the shore and the depth I could possible graph it and a subsequent plot of the data might give a reasonable cross section of the features mentioned above.  The map looks like this

To test the my hypothesis, I created a google sheet, entered the distance and the depth to the sheet and created a scatter plot.  Here’s calculation sheet,  and if you click on the the second link called “Ocean Depth Profile”, the resulting plot will also display

So the resulting graphed profile actually is a pretty good representation of depth and the required features.   In fact here’s a  image which represents the same profile with labels:

Here’s an interactive image of  picture above with definitions: 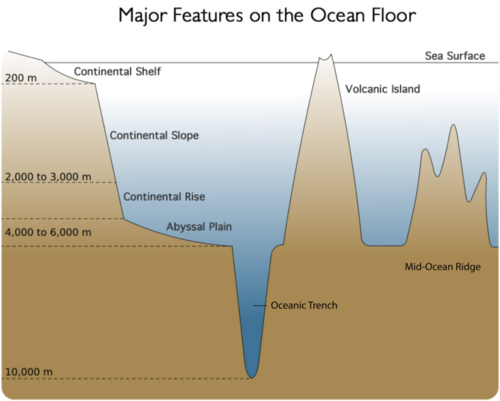 So,  I used curve smoothing feature in the chart and then created an image of the smoothed curve chart.  I put this image onto a Google Drawing and then added the vocabulary as text objects.  Here’s what a student final project looks like:

So in this way,  students can actually come to some conclusions by acquiring  and analyzing some data.

To get them to think about about these features I ask them to compare the cross section in their graph to the geologic drawing I found.   I took a picture of the graph that was generated and put into a google drawing.  I then put the important terms on the drawing and had students label the graph accordingly.

I like the idea of students using authentic data to  acquire  knowledge.  In this case, I had to do a lot of organization to make it work for them.  Ultimately all they have to do is  read numbers from a map and type them into a spreadsheet,  then make sense of the world they have constructed.